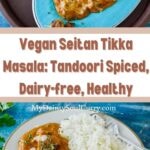 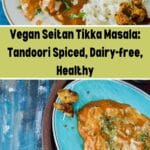 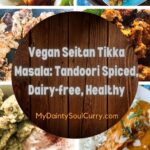 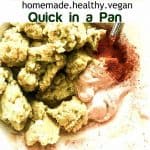 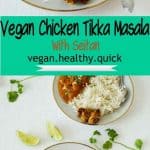 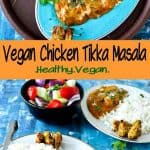 I am not sure if the tikka masala is Indian or Indo-British. But, I love this dish despite of its origin. Now that I am trying many new vegan dishes, I tried to recreate this dish in its vegan form. Hence, I have the vegan seitan tikka masala for you.

Creamy and spicy gravy with soft, semi-chewy and succulent tandoori seitan or seitan tikka, for me it’s a roadway to heaven. I love this creamy curry more than anything. What makes this dish so delicious is its unique combination of flavors, which includes many layers of flavor profiles. Talk spice, the seitan tikka has it. Looking for a rich curry without adding fat-rich dairy cream, it’s my vegan seitan tikka masala.

Making this vegan seitan tikka masala is so so easy that you will want to make it every other weekend or whenever you wish to enjoy some comfort food. Don’t want to eat this with rice or watching your carb intake? Eat this with cauliflower rice. It tastes heavenly with those chewy, semi-cooked cauli rice.

Seitan is definitely a distant cousin of chicken. I mean how can it taste and feel so similar to chicken? I have no idea. I make a huge batch of seitan and refrigerate it for a week or two. It’s a good source of protein that you can use in stir fry, curries, meatless patties and in many more meat-less cooking.

How to make Tandoori Sietan Tikka in a pan?

Grilling the seitan is the quickest step. Unfortunately, I don’t have pictures of that. But, I will ensure to update this post with the grilling step pictures soon.

It’s easier than you think.

To make it creamy, we have the cashew cream.

And making the curry:

Here are Some more vegan recipes that you may love. Click on the images to go to each recipe!