Home » Recipes » How to and Kitchen Basics 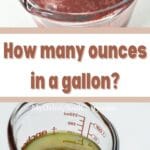 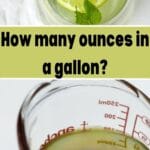 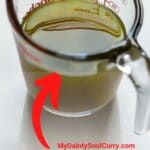 Do you wonder how many ounces in a gallon of water or any other fluid? The math is simple and straightforward, but it baffles many. The liquid oz to gallon or gallon to oz conversion, however, can be tricky and involves a little math. Remember, all you need to do is understand some basic calculations or just come back here to use this calculator and to print the chart.

Some of the commonly found units of liquid measurement are ounces, liters, pints, quarts, and gallons. While it may seem confusing, but, I have a simple chart for you. And, we are going to discuss in detail about a gallon to ounces and other liquid measurements in this post.

Type a value in the ounce field to convert the value to galoons:

As per the US measurements system, a gallon equals to 128 ounces, 4 quarts, 8 pints, and even 16 cups. Here is a chart with details of liquid conversions. Feel free to download and print it. Or, just Pinit for later.

How Many Ounces in A Gallon?

Based on U.S. customary guides for liquid conversion, a gallon is equal to 128 ounces. Here is a brief outline.

How Do Both Systems Work?

Both the US and the UK liquid customary measurements systems take the fluids by volume and divide them into 4 parts. However, the major difference is the calculation. While the US measurements system says a gallon is 128 ounces, a UK system defines a gallon is 160 ounces. Now, there is a major difference here. Even though both systems use gallons, ounces, pints, and quarts, they use different volume measurements. To summarize this, the UK gallon is about 20% larger than the US gallon.

What is a Gallon?

A gallon is a volume measurement for liquid in the United States Customary Measurement system. The abbreviation for a gallon is “gal.”

What is a fluid ounce?

A Fluid ounce is another volume measure for liquid or dry mass in the United States Customary Measurement System. The symbol is “fl oz.”

How many fluid ounces in a gallon?

The U.S standard framework considers a gallon as the imperial unit of liquid volume. While liters and milliliters are common in the UK and Europe, here in the United States, the measurement is in gallons. In USA Customary context, gallons can be liquid or dry and are distinctive in sizes and imperial structure. When used in fluid, the abbreviation for gallon is always "gal."

The liquid ounce (as we have discussed in our previous post) is an imperial and U.S. customary volume unit, which applies to both dry and liquid or fluid. For instance, a cup equals to eight fluid ounces whereas a cup equals to the dry mass of the non-fluid item in the cup. In short, the fluid ounces are volume units and should never be mistaken with dry ounces which literally means mass or weight.

How many gallons in a fluid ounce?

The formula just reverses here. To convert fluid ounces to gallons, divide the gallon value by 128.

How many imperial Fluid ounces in an imperial garden?

How many imperial fluid ounces are in an imperial gallon?

As per the imperial system, one imperial ounce equals to 0.00625 imperial gallon.

How Many Ounces Are In Half a Gallon?

The calculation of gallons to ounces stays the same. That means if a gallon is 128 ounces, half a gallon is 64 ounces and so on.

How many ounces in a gallon of water?

If the conversion is from US gallon to ounces, there are 128 ounces in one gallon. To convert gallon to ounces then, multiply the number of gallons by 128. How about gallons to Ounces (OZ)? One ounce is equal to 0.0078125 gallons. That means if you want to change a thousand ounces to gallons, you multiply by 1000.

Water is life, and nothing would exist without water. It is highly recommended that you drink at least one gallon of water every day. Drinking water cures headaches, fatigue, joint pain, and much more. Drinking a gallon of water is sufficient, but a gallon is tough to calculate.

How many glasses of water in one gallon?

You only need to understand the capacity of one gallon to get this right. One gallon is equal to 128 ounces or 3.8 liters.

What is a gallon and what is a fluid ounce?

Just like the ounces, gallons are not so easy to guess unless you know the formula. For that, you will need to convert the fluid ounces to the gallons.

How Many Ounces In A Gallon Of Ice Cream?

Okay, that's not the question I come across every day. But, whenever I have to buy ice cream for a group of people, especially during a potluck or feast, then I wonder how size should I buy?

When you think about the gallon unit, you need to understand that you can use it to measure other liquids besides water such as cream, milk, ice cream etc.

The truth is that whenever you think about serving ice cream, you tend to think about spoons. So, how many spoons will be in a gallon of ice cream.

Whenever you are buying ice cream for a big, bunch of people, make sure to buy with an estimate that a gallon of ice cream may feed up to 30 people.

How many ounces in a gallon of milk?

How many 32 oz. bottles make a gallon?

A gallon is 128 ounces, which means four 32 oz. bottles are equal to one gallon of water or any liquid.

How many 16 oz. bottles make a gallon?

Similarly, eight 16 oz. bottles make one gallon of water or any liquid.

How many 8 ounces’ glasses in a gallon?

The calculation is again the same, which means that 16 eight ounces glasses make a gallon.

How many 24 oz. bottles make a gallon?

As per the USA customary measurements, 5.3 24 oz. bottles make a gallon.

How many cups in a gallon?

Sixteen cups (liquid measurement cups) make a gallon of water. Click here to learn how many ounces in a cup.

How many ml in a gallon?

Milliliters or “ml” is another measurement in liquid volume. There are 3785.41 milliliters in one gallon of liquid.

How many liters in a gallon?

Similarly, there are 3.78541 liters in a gallon. Refer to the chart above for detailed information. If you are wondering how many ounces in a gallon of drinking water, then it's the same 128 ounces. Want to learn more about the benefits of drinking more water? Read here.